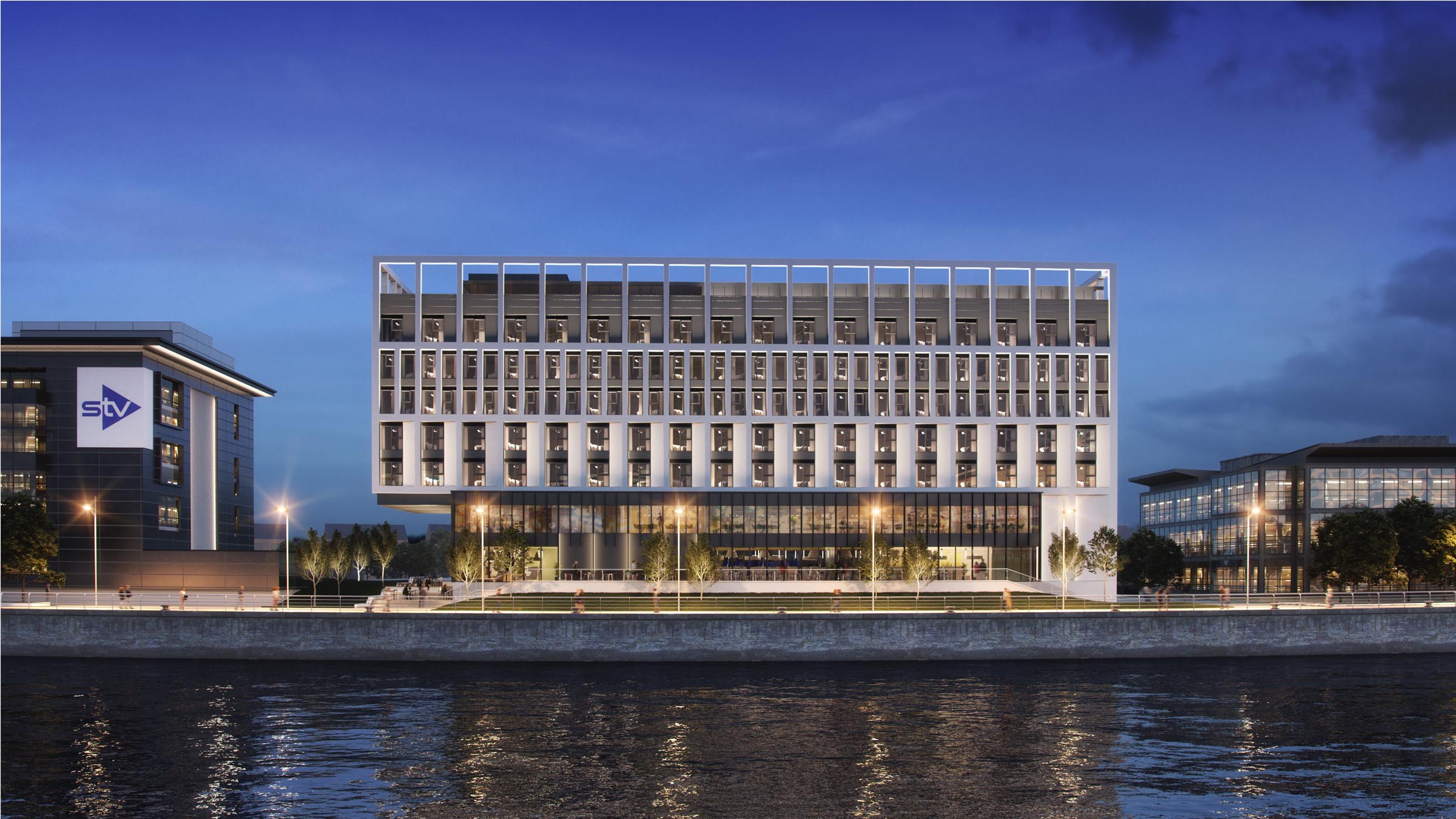 Mosaic Architecture + Design, one of Scotland’s most experienced practices, has submitted a planning application with Iceni Projects for the construction of a Holiday Inn Hotel on the former Glasgow Garden Festival site at Pacific Quay.

Situated in an unrivalled position on the south bank of the River Clyde, the 150 executive bedroom hotel will feature seven storeys with a first floor split between conferencing and co-working space and a Skybar on the top floor offering stunning views across the river to the iconic Finnieston Crane and beyond.

The project represents an investment of more than £18M in Glasgow by developer Pacific Quay Developments. The hotel will be operated by RBH Hospitality Management and will create more than 50 permanent jobs.

Formerly part of the commercial dock operated by Clyde Port Authority, Pacific Quay was used for the Glasgow Garden Festival in 1988 before being transformed into one of Scotland’s most successful new business and leisure destinations. The area is now home to the headquarters of BBC Scotland and STV and sits adjacent to the Scottish Event Campus.

Neil Haining, Director of Mosaic, said: “This development has been carefully designed in response to the site’s immediate context within Pacific Quay and provides the area with a new business hotel of appropriate scale and with high quality materials.

“The overall scale of the development has been carefully balanced with the BBC headquarters to the west and STV Glasgow in the east of the site and completes the last waterfrontage site along Pacific Quay.

“The development has been designed to take advantage of the views of the SECC, The Hydro and the Finnieston Crane, with ground floor hotel reception and public areas connecting through to an external terrace and a rooftop Skybar and terrace with north and south facing views.”

Malcolm Pearson, Director of Pacific Quay Developments, added: “Although situated on one of the prime remaining waterfront sites to be developed in Glasgow, this site has lain derelict for over 15 years.

“With Scottish Events Campus aiming to enhance its conference and exhibition offer by extending circa 200,000sq ft, adding further pressure on accommodation provision, Holiday Inn Pacific Quay will constitute an outstanding addition to Glasgow’s hospitality offering to a key strategic site for Glasgow, bringing new opportunities for economic growth to the city.”